Plane Wreck Iceland: How to Get There & When to Visit The most famous plane wreck in all of Iceland is the DC-3 lying on the black sands of Sólheimasandur on the South Coast. It is an iconic sight and much sought after music video and album cover location.

How to get there

The site of the DC-3 wreck is on Sólheimasandur, just off the Ring Road/Route 1 on the South Coast of Iceland. The Plane Wreck Shuttle is the only shuttle service taking passengers from the parking lot to the site of the wreck. Visitors to the DC-3 are not allowed to drive across the sands to the wreck itself but instead leave their cars in the parking lot. The Plane Wreck Shuttle is the fastest and easiest way to get from the parking lot to the site of the plane wreck. In the days before the shuttle, it would take about 45 minutes to walk all the way to the wreck. Taking the shuttle cuts that time by more than half, taking only 15 minutes. 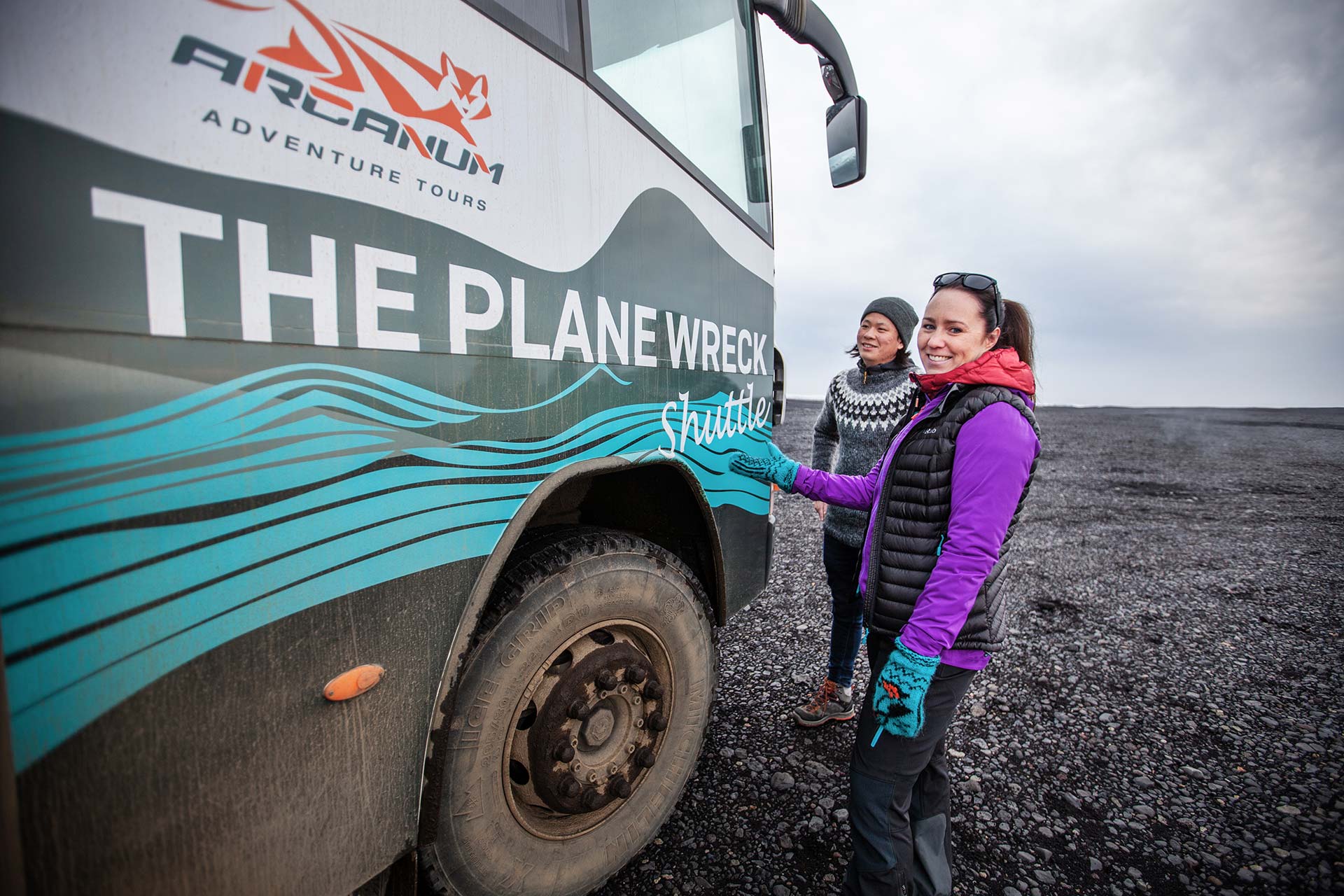 How Did the DC-3 Get There?

The US Navy Douglas DC-3 made a forced landing on Sólheimasandur in November of 1973.

The precise reasons for the emergency landing are many and unconfirmed. There is speculation that the plane ran out of fuel or only seemed to because the pilot switched to the wrong fuel tank by mistake. It is also possible that inclement weather was a major factor in the incident causing low visibility and ice to form on the wings of the plane.

No matter what caused the incident, the mystery just adds to the aura of wistfulness and wonder surrounding the site.

Sólheimasandur, or the Sands of the Realm of the Sun, to put it as poetically as possible, is what is known as a glacial outwash plain. It is a product of the active volcano Katla (which is covered by the glacier Mýrdalsjökull) erupting throughout the centuries. When Katla erupts, she melts part of the ice cap Mýrdalsjökull creating tons of meltwater. The sprawling black sand desert is made of all the ash, sand and rocks that come rushing from under Mýrdalsjökull glacier whenever Katla erupts. The floodwater drains into the ocean leaving behind an abundance of ash and sand in its wake. A barren swath that runs from the glacier’s edge all the way down to the ocean.

The DC-3 wreck is not just a place musicians visit looking to up their angst and ennui on album covers and music videos. Photographing the high contrast between the silver fuselage and the black sands of Sólheimasandur is a great way for everyone to work on their black and white photography skills. 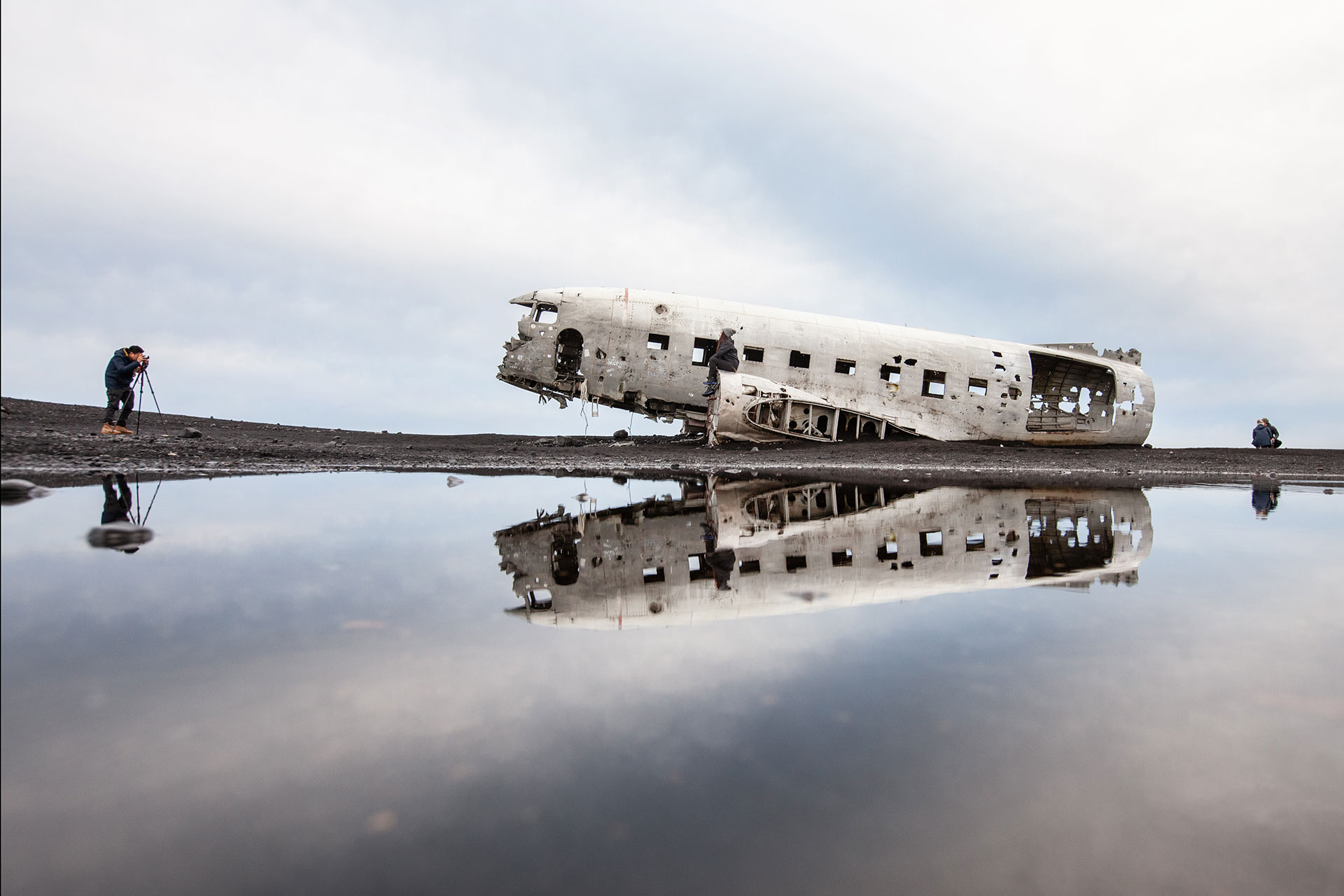 Not to worry if black and white photography isn’t your cup of tea. The sunsets over the wreck make for pretty dramatic images. And if the Northern Lights should make an appearance it would be like the raisin at the end of the hot dog (that’s an Icelandic similar to the cherry on top).

Anytime is a great time to visit the DC-3 plane wreck on Sólheimasandur. One time of year is no better than the other to visit this surreal location. Like much of Iceland, the tone and feel of the landscape can change considerably depending on the time of year, so it’s really all about the mood and vibe you prefer.

In the winter, the contrast of black sand against the metal of the plane and the white of the snow is beautiful. Add in the Northern Lights streaking across the sky overhead and it can be a magical experience. The harsh weather of early winter is thought to have played a part in the plane being forced to land. Keep in mind that a winter visit may include sideways wind, rain, sleet and snow. In the summer the mountains north of the wreck will be covered in green grass and moss. And the midnight sun shining on an otherwise barren landscape has its own kind of appeal. And visiting before or after the long days of summer will allow you the chance to catch some pretty otherworldly sunsets.

Visit the DC3 Plane Wreck on the black sands of Sólheimasandur