From towering volcanoes to majestic glaciers, there are countless natural wonders that Iceland is home to, making it no surprise that it has quickly made its way to the top of every traveler’s bucket list. Among the most enchanting of such sights are Iceland’s black sand beaches, which are the stark seam between land and sea; a truly unique part of the Icelandic landscape. As a magnet for thrill chasers and nature lovers alike, over the years these beaches have captured peoples’ hearts and memories. Though you can find pictures of these beaches scattered across the travel brochures and social media, there are a notable few that are nothing short of stunning.

The Plane Wreck on Sólheimasandur

If any photo was to have an intriguing backstory, it is this one of the black sand beach plane wreck. In 1973, a United States Navy Plane crashed on the famous Sólheimasandur beach and was abandoned by its surviving crew. Since then, it has gone on to become an unlikely decoration on the sand, with contrasting views of the bright, green mountains in the distance. Its rarity has resulted in the beach becoming a hot spot for explorers, where the surrounding landscape and skeletal plane body is one of Iceland’s most mystical destinations. There are many ways to discover the area, but Sólheimasandur black sand beach is best explored on an ATV - Quad Bike - 1 Hour tour. 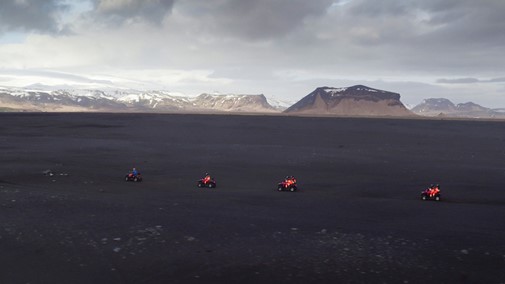 There are few things in life that truly spark the interest of avid explorers, but seeing neon orange quad bikes scoring across the black sand is something that sets every heart racing. In fact, they are almost as beautiful a contrast as the pale, grey sky above. Beaches in Iceland are sweeping and long, providing people with some impressive views. The sheer size of these beaches means quad biking in Iceland offers adventurers a new way to explore, with some added adrenaline and fun. Lava Beach is no exception, and many people enjoy its sights by the means of the Lava Beach ATV tour Iceland. Until you catch sight of the bright bikes in a jagged line on the sand, it is hard to comprehend the gigantic, monochrome wonder of the black sand beaches. This drone shot encapsulates the scale of the landscape, where its vastness is a notable attraction for tourists. Riding quad bikes in Iceland are often an ideal way to cover every spectacular square inch of this volcanic black sand. When people race alongside the choppy silver waves of the Atlantic Ocean, there is an element of awe injected into their trip; something the image captures perfectly. It can be both daunting and exciting to participate in a lava beach ATV tour while in Iceland, and selecting the ATV – Quad Bike – 2 Hours trip will give you enough entertaining memories to last a lifetime. Birds Circle Around Two People on a Beach

There are numerous photos that circulate of Iceland but rarely do they show the everyday splendor of black sand beaches. Here, you can see people taking in the renowned Reynisfjara black sand beach, which is a hub for visitors in every season. This beach is often nicknamed Lava Beach, as the sand is made of centuries-old lava, which gives it an iconic black hue. As the birds circle in the cornflower sky, and the black sand colors the ocean a darker blue, it is easy to see why any of the black sand beaches in Iceland are the dream destination for many. People Drive Away from the Black Sand Beach

Everyone is used to seeing beach photos of blue skies and white sands, but there is something about the way black sand dunes rest against an icy seascape that calls to peoples’ inner adventurer. Riding ATVs on the black sand beaches of Iceland are an opportunity not to be missed, and this image shows above all that they are also a gateway to all that Iceland has to offer. In this case, the beach is an ideal starting point of an epic quad tour in Iceland. To truly set your ambitions alight, participate in the ATV – Quad Bike and South Coast tour.