This spoon-shaped volcanic system is one of the most active and productive in the country. It is about 90 km long and 5–30 km wide. The central volcano of Katla is a broad mountain massif with a large caldera and possibly a secondary active centre in the west, at Goðabunga. The Mýrdalsjökull ice cap largely covers the central volcano and caldera, apart from a few small peaks on the caldera rim. Molten rock is stored in a shallow magma chamber underneath the volcano and forces its way to the surface from time to time.

The Katla Volcanic System has a history that stretched back into the Ice Age.

A catastrophic, explosive eruption occurred about 12,000 years ago, when part of the caldera may have formed. At least 100 volcanic units date from the last 10,000 years and 20 eruptions have occurred in Katla in the last 1,100 years, the most recent in 1918 and probably a small one in 1955. Short volcanic fissures and lava flows are found to the northwest and north of the ice cap. All are prehistoric. A major eruption series (the Eldgjá Fires) occurred around 934 AD (934-938?) in the Katla Volcanic System. Subglacial activity was vigorous within Katla itself and outside the ice cap, a long, discontinuous fissure opened up, including Eldgjá proper (The Fire Chasm). It produced an enormous volume of lava, most of which headed to the south. The volume is 18.1 km3 or 18 billion cubic metres, over 45 billion tons, and the area amounts to 780 km2. This fissure also sent copious amounts of tephra (1.4 km3) into the air.

The magmatic rocks of Katla are mostly basalt, but acid (silica-rich) rocks are also found, mainly in the form of silica-rich (rhyolitic) tephra layers. 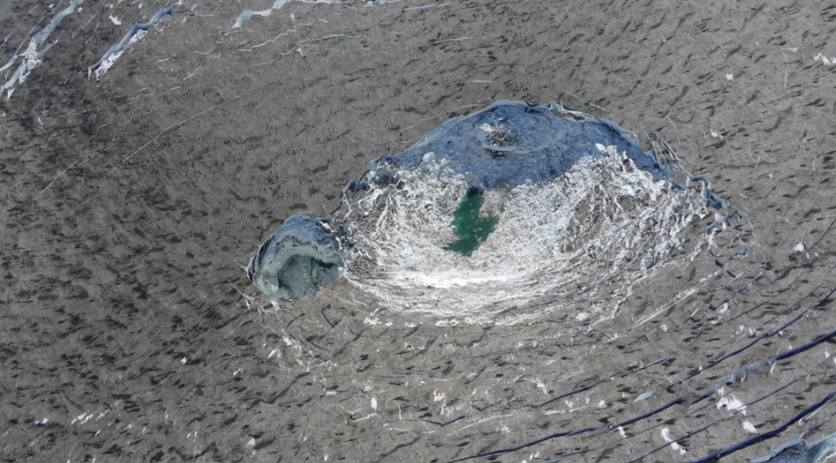